Let me preface this article by saying I’m good friends with Mike Centola, the owner of Allstar Tactical. I’m fan of him and his company, and he’s a true asset to the 2a and shooting community (don’t get too big of a head, Mike). Having said all that, let’s get down to it.

Per their “About Us” section on their website, Allstar Tactical was founded in 2008, and began as a retail dealer for firearms, accessories, and gear. Allstar Tactical grew quickly over the next couple of years, and in August of 2010 they released their first custom part, the BATLTRIGGR. Since then, they have grown to include upper and lower receivers, complete rifles, small parts, magazines, and barrels. In addition to their own products, they also perform services such as laser engraving and color fill for AR receivers.

In addition to the above-mentioned products, Allstar Tactical also produces some wicked muzzle devices; the DELTA muzzle brake and their CorkScrew flash hider. Mike was generous enough to send me their DELTA brake for my personal AR, and that is the subject of this review (the CorkScrew flash hider will be reviewed at a later date).

The DELTA brake is machined from 4140 steel and coated using FNC (Ferritic Nitro-Carburizing), a process in which nitrogen and carbon diffuse into the surface of a part that is in a ferritic condition. This process raises the final hardness to 60+RC and leaves a satin black finish. The standard 1/2-28 threads means it will install on any common .223/5.56 barrel AR barrel. At 2″ in overall length, it’s a little longer than I’m used, but not obnoxious by a any means.

I installed the DELTA brake on my Smith & Wesson M&P15 AR for testing. The original barrel that came with the rifle was swapped out for a 16″ Daniel Defense CHF barrel about two years ago, and topped with a Daniel Defense Muzzle Climb Mitigator, which, up until now, was my favorite brake (but more on that later).

AT logo proudly displayed on the top

Installation was pretty standard fair, utilizing the included crush washer and timed so that there are ports at the 12 o’clock position, and no ports at 6 o’clock. It installed on my barrel without a hitch, and the quality of the machined threads made it a breeze. Another way to tell it’s installed correctly is by making sure the Allstar Tacticalt logo is on top, while the American flag is on the bottom.

From a purely fit-and-finish perspective, this brake is fantastic. Great quality, and it really feels like a solid piece. Not heavy at all, just…solid. 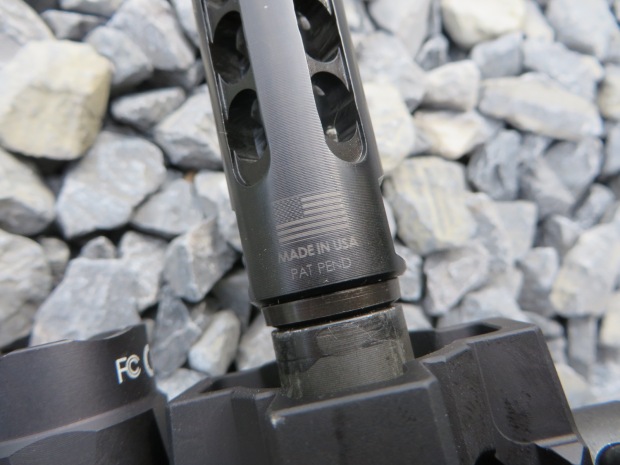 In the looks department, the DELTA brake has it spades. I absolutely love the looks of it. It’s aggressive without looking too outlandish, and, according to AT’s product announcement, was designed as a standoff device, with input from local martial arts and impact fighting experts. That’s not something you see or hear every day, so I think it’s a testament to Mike’s obsession with doing things with the utmost quality.

So, we know it fits well, is built like a tank, and looks great, but how does it perform? In a word, smooth as butter.

This is not a technical or scientific review by any means, so I’m going by feel and experience. With five sets of three gas ports (offset at 72 degrees), it did a wonderful job controlling muzzle climb as the gases are redirected up and out, away from the barrel. I was able to get back on target, shot after shot, very quickly. The DELTA brake isn’t quiet at all, but it’s no louder than any other muzzle brake I’ve tried, and with an MSRP of just $45 it comes in at a fifteen on a scale of one to ten. I just don’t believe there’s a better brake out there for the money. As much as I loved my DD Mitigator, the DELTA brake has won me over with it’s performance, good looks, and shockingly great value.

This entry was posted on July 13, 2014, 8:07 pm and is filed under Firearms Reviews. You can follow any responses to this entry through RSS 2.0. You can leave a response, or trackback from your own site.