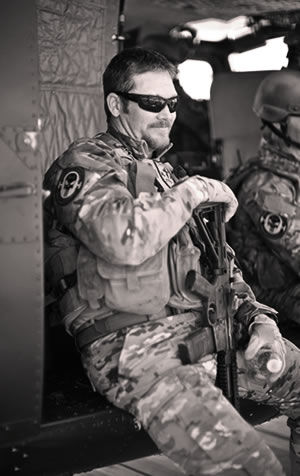 The Merriam-Webster online dictionary defines a hero as “an illustrious warrior,” and “one who shows great courage.” Although I didn’t know Chris Kyle personally, I’d have to say that just about sums him up.

If you haven’t heard, Chris was shot on Saturday, February 2nd, at a charity event at Rough Creek Lodge in Glen Rose, TX, which is about 50 miles outside of Dallas. I’m still numb over it.

Chief Petty Officer (CPO) Chris Kyle was in the Navy from 1999-2009. In that time he served four tours in Iraq as a sniper with the Navy SEALs, and was awarded two Silver Stars, five Bronze Stars with Valor, two Navy and Marine Corps Achievement Medals, and one Navy and Marine Corps Commendation. Chris was so deadly the Iraqi insurgents nicknamed him “The Devil of Ramadi” and offered an $80,000 bounty on his head.

Mr. Kyle gained notoriety after he wrote the best-selling book, “American Sniper: The Autobiography of the Most Lethal Sniper in U.S. Military History,” which details his overseas tours and his 160 confirmed kills of insurgents.

I picked up this book about a week after it came out and was immediately engulfed in it, finishing it, literally, in about 3 days time. I couldn’t put it down. What really hit a chord with me was the honesty. Chris didn’t try to portray himself has a “GI Joe” or a hero, but as a real man. A man who struggled to balance his job and family, as most SEALs do. A man who had the courage to do what most people can’t even dream about. If you’re in the market for a good read, I highly recommend picking it up. It’s a tremendous insight into what these warriors deal with.

One of the quotes in the book that really struck me was the following; “It was my job to shoot the enemy, and I don’t regret it. My regrets are for the people I couldn’t save; Marines, soldiers, buddies. I’m not naïve, and I don’t romanticize war. The worst moments of my life have come as a SEAL. But I can stand before God with a clear conscience about doing my job.”

Mr. Kyle, it is because of you and people like you that I can sit here and write this without the worry of repercussions. With a heavy heart, I say thank you. You’re a true hero and warrior, and will be missed.

This entry was posted on February 3, 2013, 3:10 pm and is filed under Miscellaneous. You can follow any responses to this entry through RSS 2.0. You can leave a response, or trackback from your own site.